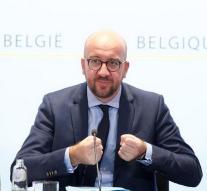 brussels - The Belgian security forces to take additional measures for the national holiday Thursday. It's Friday morning in Brussels decided by the National Security Council.

Which was convened in response to the attack in Nice, which took place on the French national holiday.


'With the new facts in Nice we will see the already planned measures to be sure we do the maximum for the safety of the citizens,' said Prime Minister Charles Michel Friday morning on the radio.

On the national holiday takes King Philip traditionally the palace in Brussels both a civilian and military parade wondering where many politicians, ambassadors and other dignitaries were present. For the ordinary Belgians, there are many festivals in the country where thousands of Belgians come to. The big Ghent Festivities, beginning Friday, just continue. This event attracts every year many Dutch.

The National Security Council is composed including the prime minister, the ministers for security, justice and defense, and the heads of the police and the intelligence services.