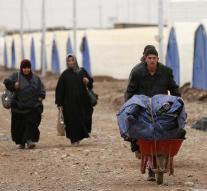 brussels - The European Union is 25 million extra free for humanitarian aid to Iraq. The money is primarily intended for the population of the northern Iraqi city of Mosul, where the military and terrorist IS becoming increasingly fierce battle to deliver.

The total for this year therefore amounts to 159 million. This is mainly devoted to basic assistance to IDPs and civilians in conflict areas. And that is badly needed as winter approaches, says EU Commissioner Christos Stylianides (Humanitarian Aid and Crisis) Friday.

About 13 million Iraqis depend on humanitarian aid.