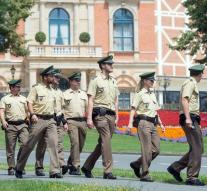 bayreuth - The famous opera festival in Bayreuth, Germany is Monday under stricter safeguards launched. Access to Markgräfliches Opera House, where Richard Wagner's opera Parsifal opens the festival, is lined with police cars and bags of visitors are checked.

Out of respect for the victims of the recent German attacks, the red carpet and opening reception are abolished. Chancellor Angela Merkel, a regular visitor of the festival, had previously informed not to come this year.

The premiere of Parsifal is also shown in many cinemas in Germany tonight. The Bayreuth Festival, which this year seven operas are performed, lasting until August 28th.