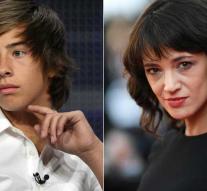 new york - Asia Argento, the Italian actress and director, who, as one of the first Harvey Weinstein, accused of sexually unacceptable behavior, has been accused of sexual assault. She has given the man who accuses her a large sum of money. That writes the New York Times (NYT) that says about paperwork in the case.

Jimmy Bennett (22), an actor and rock musician from Los Angeles, stated that Argento had sexually assaulted him in a California hotel room in 2013. He was 17 years old and Argento 37. In California sex with persons under 18 is punishable.