Home / World / Actress from 'racist' Dove advertising does not get fuss 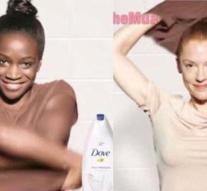 amsterdam - Dove's advertising was not racist at all. That's what actor Lola Ogunyemi writes in an opinion article at The Guardian.

'I'm the woman from the' racist 'Dove advertising. And I'm not a victim, 'said the head above Ogunyemi's speech, the black actress. Social media had a big fuss because of the advertisement, which was called racist because Ogunyemi pulled off her brown shirt and a white woman came out of it. Some saw that the black skin was 'washed white'.

Deaf declared immediately to 'emphasize the diversity and true beauty of man'. That is what Ogunyemi likes. She argues that this advertisement gets the label of racism- while it certainly does not slow down the problem. 'My whole life was told to me: you are so beautiful for a colored woman. '

She wanted to do something about it. 'I jumped when Dove offered me this opportunity. I had to represent the dark skin, to remind the world that we are beautiful, and more importantly, that we are appreciated. '

That was a bit different. She was alerted to a Facebook post and in the shortest time she was the face of racism. 'If you googlet on' racist advertising, 'you get your first impression,' Ogunyemi writes. She received messages from friends who asked if she was 'ok'.

But according to Ogunyemi, advertising is not racist at all. She realizes that a picture of her can be experienced racistically. But whoever sees the whole video should approve it properly, she says. 'I loved it. My family too. People congratulated me to represent Black Girl Magic. I was proud. '

According to Ogunyemi, Dove had to defend the advertisement instead of removing it.