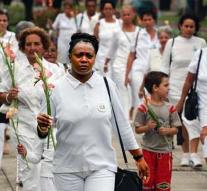 havana - Dozens of Cuban activists Thursday at the International Human Rights Day arrested during meetings in Havana. Most were members of the Cuban opposition group Damas de Blanco (Ladies in White). That made the Cuban Commission for Human Rights and National Reconciliation Thursday local time known.

Damas de Blanco consists mainly of women political prisoners or former political prisoners who contend together against the suppression of the opposition on the island. Many of them were Thursday immediately after leaving their house already held. The group had just called for a peaceful demonstration.