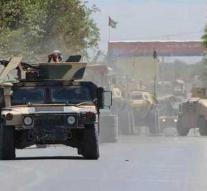 kabul - The Taliban's actions have killed at least 10 people in Afghanistan. In the Ghazni province extremists stormed a checkpoint of the police. A roadside bomb exploded in Zabul province.

The police post fell into the hands of the Taliban after hours of shots. They then left with the weapons. The attack killed eight police officers.

Two civilians were killed by the roadside bomb.