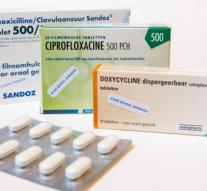 brussels - More and more bacteria become insensitive to antibiotics, which means that patients can no longer be treated. The European Commission launched an action plan on Thursday to collect the risks.

Every year, 25,000 people die in an EU infection that is no longer available. The resistance 'poses an increasing threat worldwide, and if we do not act decisively now, they can die more by 2050,' said EU Commissioner Vytenis Andriukaitis (Health).

The action plan must counteract human and animal resistance and contain European guidelines for the use of antibiotics. In some EU countries, it is strictly prescribed, while, for example, Dutch doctors are very reluctant. The idea is that the 'best practice' will be followed, also in livestock farming.

Furthermore, researchers in the Member States will work more closely together. The action plan proposes much more coordination. Developing countries are also involved.