Home / World / Action in Mexico turns out to be a bloodbath 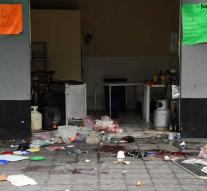 mexico city - A performance of a mariachi band in Mexico City has turned into a bloodbath. Five traditionally decked musicians turned out to be murderers. During the performance they put down their instruments and grabbed firearms, with which they shot around. At least five people were killed, eight others were injured. Among the wounded would be a foreigner.

The incident happened Saturday night at the Plaza Garibaldi in the capital of Mexico. This square is considered the heart of mariachi music and is very popular among tourists. On the square it was even more crowded because Mexico celebrates its national holiday on Sunday. After the bullet rain, the five musicians fled on motorbikes.

According to Mexican media, the shooting may be related to a quarrel between rival drug cartels. Mexico has been suffering for years under a bloody war between gangs.