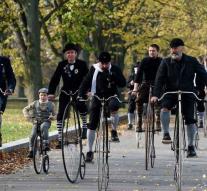 prague - Activists in the Czech Republic have gone to court to challenge a bicycle ban in the center of the capital Prague. The association Auto * Mat states that the municipality is wrong to ban cyclists from parts of the tourist center.

The municipality has determined that with effect from Thursday, parts of the center that are already known as a pedestrian zone and the famous Wenzelplein will be forbidden for bicycles between 10.00 am and 5.00 pm. According to the city council, the many cyclists are a danger to the crowd of pedestrians in the old center. The association Auto * Mat disputes this argument and states that in the past ten years in Prague only three clashes between a cyclist and a pedestrian have been registered.

The city banned segways in the historic center two years ago. Prague is a tourist attraction and the city received 7.6 million tourists last year. That is still about ten million people less than our capital.