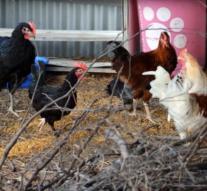 hobart - The authorities in the capital of Tasmania, Hobart, have started a campaign to catch wild cocks. The city has for years plagued by the birds. They give a lot of inconvenience by their crowing and deliver danger in traffic. While the roosters are a prey to dogs and cats.

There are so wild caught males, but also people who want to get rid of their roosters, birds emit a club of poultry farmers. A portion is placed in poultry breeders, the rest gets an injection.

The wild roosters population in Hobart has arisen because people keep chickens as a hobby, dump their roosters because they lay eggs.