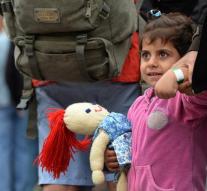 brussels - The European Commission takes legal action against Hungary, Poland and the Czech Republic because they refuse to accept asylum seekers from Greece and Italy. To this end, EU countries are legally required by 2015 agreements.

The commission has long been for countries not to comply with their arrangements and had already announced the action. The so-called infringement procedure is a first step. With constant refusal, substantial fines can be followed.

Slovakia, which left only sixteen people, is still dancing. Among other things, that country voted against the mandatory redistribution in 2015 but is also bound.

The Member States have so far released more than 20,869 asylum seekers from Greece and Italy. Mostly, it is about Syrians and Eritreans. Brussels allowed the Member States to take over more people almost every month in the last year.