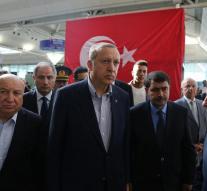 - Turkey has strongly condemned the terrorist attack in Nice and their solidarity with France.,, The modern barbarians who committed this attack have nothing to do with religion or humanity of doing, '' said the spokesman of President Recep Tayyip Erodgan, Ibrahim Kalin.,, For them, this world has no place. '' It is a duty,, world and need '' to unite against all forms of terrorism, he added.

Turkey has been repeatedly targeted by terrorist attacks, with dozens of deaths. Some attacks have been attributed to Islamic extremists, others to Kurdish separatists.