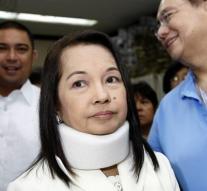 - The highest court in the Philippines has former President Gloria Macapagal Arroyo Tuesday acquitted of theft. She was suspected of having in its own time money from the state lottery stolen that was meant for charity programs.

A majority of the judges found that there was insufficient evidence.

The 65-year-old Arroyo was president from 2001 to 2010. There is still another case against her for bribery in a major internet deal.