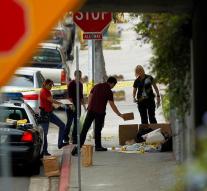 - Police in the US San Diego has a 39-year-old man arrested on suspicion of the murder of three homeless people and injuring several others.

The attacks were carried out while the men were sleeping, police said.

According to media reports, two were homeless after they were killed also torched. The first two murders were committed within 25 hours, 3 and July 4. After that followed a third murder. Most victims were attacked with a hammer.


The police could keep the suspect Friday when he again had attacked a man. The victim had to seek state aid, and the 39-year-old suspect could be arrested.