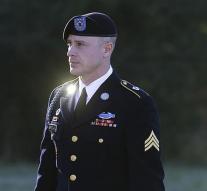 - US soldier Bowe Bergdahl, who is being prosecuted after years of captivity by the Taliban in their own country for desertion, has pinned his hopes on leaving President Obama. The sergeant asked him for a presidential pardon, US media reported Saturday.

In 2009, Sergeant Bergdahl walked away from his post in Afghanistan because he disagreed with the state of affairs in his unit. He was caught by Taliban fighters and was stuck for five years. Eventually the military by allowing a prisoner exchange, five Afghans were allowed to leave the detention center at Guantanamo Bay for his freedom.

Prosecutors later decided to prosecute him because he would have deserted, even though it came from an internal investigation revealed that Bergdahl plan had been to present himself away at a military post. The trial is scheduled for April 18, but if Obama accepts the request, he goes free.

Obama's successor Donald Trump called the military ' a traitor who should be executed. ' Then he Bergdahls lawyer asked whether still can get a fair trial.