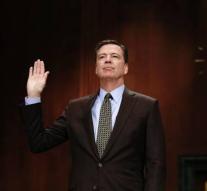 washington - Former FBI Director James Comey has stated that President Donald Trump has asked him to refrain from an investigation into ex-security advisor Michael Flynn. Trump said to Comey: 'I need loyalty. I count on loyalty. 'The fired FBI boss revealed that in a written testimony, published on Wednesday.

Comey will personally testify to the Senate Security Commission on Thursday. He stated in detail on a dinner he had with Trump on January 27, one week after his entry into the White House. Comey revealed that Trump had asked him if he wanted to stay as director of the FBI at that dinner.

He was worried that Trump was trying to create 'a kind of protection relationship.' 'That worried me, given the traditionally independent status of the FBI leadership branch. '