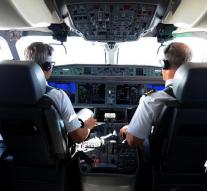 washington - Security codes that would allow access to United Airlines airplane cockpits might be on the street. That reported the US airline on Monday.

On Sunday, The Wall Street Journal reported that United had informed pilots that the access codes were accidentally posted by a flight attendant on a public website. United did not want to confirm this story on Monday, but said there was a possibility that the codes would become public.

A spokesman for the third largest airline in the world claims that the cockpit doors are still secured in other ways but could not take precise measures for safety reasons. 'We are busy working to solve this specific security situation,' said United spokesperson.