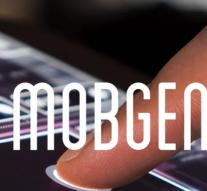 amsterdam - Appmaker MobGen from Amsterdam was acquired by Accenture. This was announced by the American giant on Tuesday. It is not known how many will pay Accenture.

MobGen, founded in 2010, has more than 160 employees. Who work at the headquarters in Amsterdam and offices in Spain and London. MobGen made include apps for supermarket chain Plus, Shell, ABN Amro, Van Lanschot Bankiers, Toto, AutoTrack, Agriculture and Report Crime Anonymously.