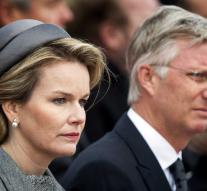 brussels - When asked why the Belgian king had nothing themselves heard when the alarm phase in Brussels Saturday, November 21st at the highest level was scaled, according to the newspaper Het Nieuwsblad has a simple explanation : he was not there, he was a weekend trip to Brittany.

King Philip and Queen Matilda had previously planned the weekend in Brittany and the reason for their short stay there is a private matter, said a palace spokesman told Het Nieuwsblad.

During the exceptional terrorist threat when soldiers patrolling the capital Brussels and public life came to a virtual standstill, it complained that the head of state was invisible. The royal couple returned as scheduled Sunday, November 22nd back. Het Nieuwsblad complained Tuesday still with the headline " Crisis in Brussels, but King Philip was (and remained) in Brittany. "