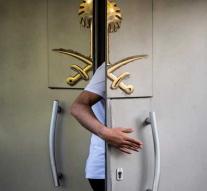 riyad - The prominent Saudi journalist Jamal Khashoggi, who is missing since he visited the Saudi consulate in Istanbul last week, was tortured and murdered by a flown-in liquidation team. Saudi agents then cut his body into pieces and smuggled it out of the building in boxes.

That means sources within the Turkish police. Ankara has conducted a thorough investigation into the startling disappearance, which- if murder is proven- will cause a gigantic diplomatic riot between the two countries, which are already fighting over numerous other cases.