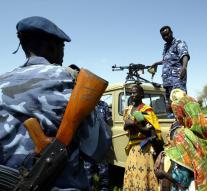 khartoem - A Frenchman kidnapped in Chad in March and brought to Darfur has been released. He is on his way to the Sudanese capital, Khartoum. That's what the authorities announced on Sunday. Paris confirmed the news.

Sudan has been working with government officials from Chad and France for weeks to release the hostage, whose name has not been revealed. He was kidnapped south of Abeche, a mining region about 800 kilometers east of N'Djamena, a few hours drive from the border with Sudan.