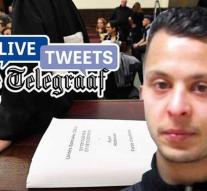 brussels - The Belgian lawsuit against terror suspect Salah Abdeslam started in Brussels with great interest. The 28-year-old Frenchman immediately made clear no questions to answer.

Correspondent Eveline Bijlsma attends the lawsuit and tweet about this. You can also find her tweets at the bottom of this article.

'I do not wish to answer questions,' Abdeslam told the court chairman. He also refused to stand up. Co-suspect Sofien Ayari did, according to Belgian media, answer questions. VTM reported that the duo was hearing the accusations rather unmoved.

Abdeslam is the only surviving terrorist in the Paris attacks, killing 130 people on 13 November 2015. He has been in prison in Paris for more than 2.5 years, but now has to account for a shooting in Belgium in the municipality of Vorst in Belgium.

The Palace of Justice in Brussels will be guarded as a fortress in the coming week. Concrete blocks have been installed to prevent cars from entering the building. Helicopters fly above the building, there are patrolled by dozens of agents and everyone has to go through a metal detector. The fear is great that Salah Abdeslam is freed by brothers, or that he does something to himself.

In France, the 28-year-old terrorist is the best-guarded prisoner in the country. He is in the cell in the Paris suburb Fleury-Mérogis, where he is being watched 24 hours a day with cameras. During the trial, which takes place this week, he stays in the prison of the northern French Vendin-le-Vieil. On Monday the case will be dealt with in terms of content, Tuesday will follow the sentence and Thursday the lawyers will speak. The charge against the jihadist, who is tried with an accomplice, is' attempted murder in terror. 'The duo hangs over 40 years in prison, the judges pronouncing at the latest in a month.

Salah Abdeslam deposited three terrorists at the Stade de France on November 13, 2015, where they blew themselves up. It is one in a series of attacks during the horror night in the French capital where 130 people died in total. Of these, 89 fell in Bataclan concert hall.

Instead of blowing himself up in Paris, Abdeslam left his car in the city and was picked up by friends from Belgium. He has long been thought to take his legs because he did not want to die as a martyr, but recent research has shown that his bomb belt was not working. In a testament he stated that he 'wanted to finish the job'. As remarkable as the course of this evening is the fact that he managed to stay out of the police for four months.

On March 15, 2016 seven agents fall into an apartment in the Brussels suburb of Vorst, thinking that the building is vacant. As soon as the front door collapses they are fired at with a Kalashnikov. Even after the help of special teams has been called in, sieges run into huge shootings. Only when a sniper turns off one of the shooters, the police can enter the apartment. The body of Mohamed Aziz Belkaïd lies lifeless on the ground, but Abdeslam and Soufiane Ayari manage to escape.

Yet the raid means the beginning of the end for the most wanted terrorist in Europe at the time. He calls at the end of his life with his nephew Abid Aberkane in the municipality of Jette, who is also known as extremist and is watched day and night. The call from the jihadist ('Hey, where are you?') Is also tapped. Aberkane brings Abdeslam and Ayari to his mother in Molenbeek. Among other things, a large pizza order points the police to their hiding place.

Until now, Abdeslam was mostly silent. It drove his lawyers to despair, they got on. Belgian criminal lawyer Sven Mary is now assisting the terrorist again. But not only justice hopes that the jihadist speaks, victims and survivors of the attacks in Paris and Brussels follow the case closely.

Several victims are present on Monday. 'This is a very important process for them,' says counselor Samia Maktouf, who looks after the interests of several French victims. 'It is a long time for them, because in France there is also Jawad Bendaoud, who offered the brains behind the attacks a shelter. They want to know more about the attacks, even though every snipper information makes them relive the pain. Yet that is nothing compared to what has happened. The relatives hope that Abdeslam speaks, but even without his cooperation there is already a lot of evidence in the final terrorist case. '