Home / World / 'Abadi on the head in the Iraq elections' 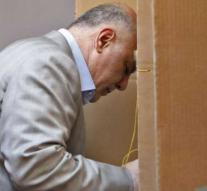 baghdad - Prime Minister Haider al-Abadi's alliance has, for the time being, received the most votes in the parliamentary elections in Iraq. This has been reported by sources within the electoral commission and an employee of the security service on the basis of the votes that have been counted so far.

The official result is probably Monday. According to the preliminary results, the party of the influential Shiite cleric Moqtada al-Sadr is in second place.

The Iraqis went to the polling stations on Saturday to choose 329 MPs. There are approximately 7,000 candidates for this.