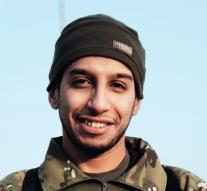 - The Belgian extremist Abdelhamid Abaaoud was on the evening of Friday, November 13th in Paris and may have participated in the terrorist attacks. French media reported Friday that he will see in pictures of surveillance cameras is when he at 22:14 pm Metro station Croix de Chavaux walked in Montreuil, on the eastern outskirts of Paris.

The metro station is 250 meters from the spot where the car was found to terrorists sowed half an hour earlier death and destruction on terraces in the French capital.