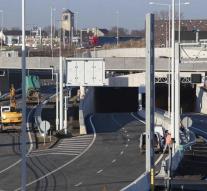 maastricht - King Willem-Alexander Tunnel tunnel near Maastricht Thursday evening about half past twelve went open. Records the Limburg town bid farewell to the surface A2, which cut through the city. A bus with invited guests, including Minister Melanie Schultz van Haegen of Infrastructure and Environment and Mayor Annemarie Penn-te Strake Maastricht, the A2 tunnel is first put into use.

King Willem-Alexander Tunnel is the first dual tunnel in the Netherlands. In the bottom two tunnel tubes will drive through traffic between Eindhoven and Liege. The upper two tubes intended for the local traffic. On top of the tunnel a green strip will be constructed for pedestrians and cyclists, in which 1800 trees will be planted.

The project cost 850 million euros and is funded by Maastricht and Maastricht, the government and the province of Limburg. The official opening will take place in spring 2017.