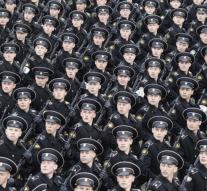 moscow - Who goes by the figures of the Russian Defense Ministry, gives the impression that youth is not very healthy. One third of the conscripts in Russia is rejected. Has announced that the head of the medical department of the department.

The newspaper The Moscow Times suggests that it is not so bad to health, but rather it is about the dire conditions in the army. Many young men who are called, pretending to be ill to escape the reign of terror in the army. According to Defence is different: only very healthy men are approved.

However, reports in the Russian press about abuses among conscripts occurs frequently. Died in July as a nineteen year old soldier had beaten a few days more to him with an iron bottle on his head. There are many examples of fatal, self-inflicted injuries and suicides in the army barracks.