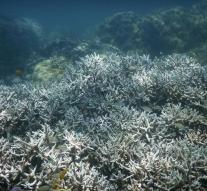 sydney - The warming and acidification of the seawater has devastating effects on the coral on the Great Barrier Reef in Australia. In the northern and central region is more than a third of the coral is dead or dying at the point, James Cook University reported Monday.

The Great Barrier Reef is the largest coral reef system in the world. It stretches 2,300 kilometers along Australia's east coast.

,, We have examined 84 reefs in the northern and central areas and found that 35 percent of the corals are dead or dying, '' said oceanographer Terry Hughes.,, It is the third 'bleaching' of coral in eighteen years and clearly much more extreme than anything we have measured before. ''


Last week, a chapter on the reef in a UN report on climate change deleted at the request of Australia, because the information would be detrimental to the Australian tourism industry.,, Recent experience in Australia shows that negative comments have world consequences for tourism, '' said the statement from Australia.