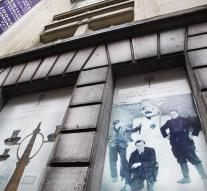 brussels - One of the three suspects in the attack on the Jewish Museum in Brussels on May 24, 2014, the 26-year-old Nacer B., can go home. A court in Brussels, the Frenchman Tuesday freed on the condition that he is available, surrenders his passport and pay a deposit of 50,000 euros. Which upheld the federal prosecutor.

Main suspect of the attack Mehdi Nemmouche remain as co-defendant Mounir A. in custody. The bombing killed four deaths. B. Why now released, is unclear. He was arrested in Marseille on December 9, 2014. Police found in his house include a Kalashnikov.

B. was between 2008 and 2010 in the same prison as Nemmouche where they radicalized. B. Nemmouche would start in April 2014 called from Brussels, and B. would have joined him. Nemmouche was arrested in Marseille on May 30, 2014.