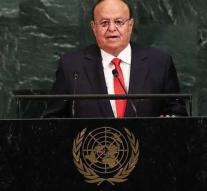 aden - The government of the torn Yemen has called on allies to come to the aid of the South Yemeni port city of Aden. Since the beginning of 2015, it has been the refuge of the government of President Abd-Rabbu Mansour Hadi. Rebels from the north of the country that are called Houthis, in 2014, with the help of the influential former president Ali Abdullah Saleh, conquered the capital Sanaa and expelled the government.

On Sunday, violent battles broke out in Aden between government-loyal troops and warriors of the Southern Transition Council (STC) who wanted South Yemen to part. Dozens of victims have fallen. Hadi's headquarters fell into the hands of those separatists, reported local media. The prime minister of Yemen, Ahmed bin Dahr, therefore asked all Arabs for help via Facebook.