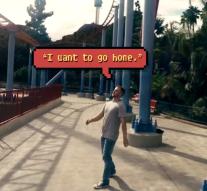 RollerCoaster Tycoon players will recognize the iconic events : deadly rollercoaster where the cars off the track fly, a grappling hook that allows people to be thrown into the water, puking visitors, spontaneously appearing bins and obviously lekgeprikte balloons.

The "A Fun Day in RollerCoaster Tycoon video is a true internet hit. Within one day, the video has been viewed over 300 000 times. Probably because it arouses in many a nostalgic person.

Andrew makes more controversial videos about video games. In January this year he placed the Fallout vs Skyrim video on his YouTube channel AndrewMFilms. That video has been viewed over 7.7 million times.