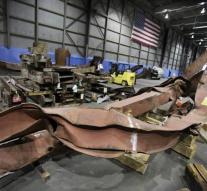 - A widow of a victim of the attacks on Friday in Washington on September 11 2001 instituted legal proceedings against the Kingdom of Saudi Arabia. The woman, Stephanie Ross DeSimone says that the country has supported the terrorist group al-Qaeda and its leader, Osama bin Laden.

She is claiming damages for the death of her husband, a naval officer Patrick Dunn. The woman, the case also filed on behalf of her daughter, whom she was pregnant when her husband was killed.

The US Congress passed Wednesday 11 septemberwet, which allows victims and survivors of the attacks on the WTC in New York and the Pentagon in Washington sue the oil state. The Ministry of Foreign Affairs of Saudi Arabia had previously know ' themselves to grave concern 'about the law.