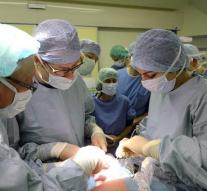 - In European hospitals each year 91,000 people die from infections they picked up on the spot. That a new study showed. The number of patients being infected in a clinic is estimated at 2.6 million. It often involves pneumonia, septicemia, urinary tract and wound infections. Illness Cases are including multidrug resistant bacteria.

The researchers have published their findings Tuesday in the journal 'Plos Medicine. 'This study is in my eyes the best I've seen on this issue, not only in Europe,' praised Petra Gastmeier, a Berlin expert in this field. 'It matches our suspicions. 'It is estimated that roughly to prevent a third party from the contaminations, by, for example, better hygiene.

The research team was led by Italian Alessandro Cassini, attached to the European Centre for Disease Prevention and Control (ECDC). He used data collected in 2011-2012 in thirty countries with a total of 510 million inhabitants.