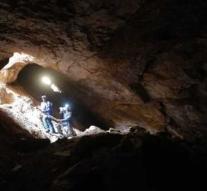 johannesburg - About nine hundred miners are stuck in a gold mine in the Free State province in South Africa due to a power outage. Mine operator Sibanye-Stillwater reported to the News24 site that all miners are unharmed.

Technicians try to remedy the fault so that the companions can leave the mine. According to the miners trade union AMCU there were initially 940 people in the mine, but forty of them have already been rescued.

AMCU has called the mine operator to speed up the moves behind the rescue operation, because several companions can not be without medication for too long.