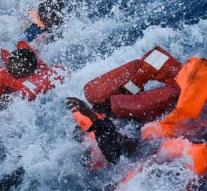 geneva - Some ninety migrants have reportedly drowned off the coast of Libya when their boat capsized. Only three of the crew members survived, reported the International Organization for Migration (IOM). Two managed to reach the coast swimming and one was rescued by the crew of a fishing boat.

The lifeless bodies of ten crew members have now been washed ashore, according to the IOM. They were eight Pakistani and two Libyans.

The IO and the UN recently reported that up to 29 January this year, 6624 migrants have already moved to Europe. That is approximately 640 people more than in January 2017. Most go to Italy (64 percent of the total), Spain (19 percent) and Greece (16 percent).