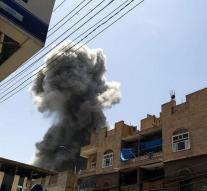 saada - Three women and six children of the same family were killed on Friday morning by an air attack on the Yemeni city of Saada, reported the head of local health service on Friday. Three other citizens were injured. According to the health official, the attack was conducted by the international coalition led by Saudi Arabia.

A relative told the victims to sleep when the attack occurred in the early morning. Residents fought to help, but did not dare to seek victims. There was one or more fighting devices above the destroyed house.

Saada acts as a bolus of the Houthi movement, which has a large part of Yemen. The city has been bombarded repeatedly by the coalition, which supports the expelled President Abd-Rabbu Mansour Hadi.

Since the beginning of the civil war in 2015, more than 10,000 people have died and about 3 million people have been expelled from their homes. The coalition sees the conflict as an attempt by Iran, which would support the Houthians, to gain more influence in the stray country.