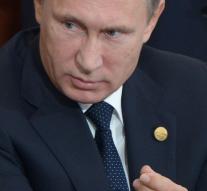 moscow - A record 89.1 percent of Russians support the policy of Russian President Vladimir Putin, according to a survey by the independent agency VTSIOM level.

It is Putin's tallest by grade in his career as Russian president. According to the bureau level would the Russians overwhelmingly support the policy of the Russian government in Syria.

The appreciation of Putin has been rising since the Russian annexation of the Crimea in Ukraine and grew only by following the armed conflict in eastern Ukraine. According to 47 percent of respondents Putin should help the Assad regime to keep in the saddle, so as to " together to fight against the terrorists ".