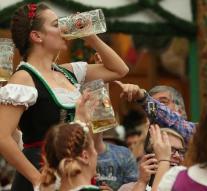 munich - In the first weekend of the Oktoberfest in Munich, it is estimated that more than 800,000 visitors have come to the festival. That was considerably more than in 2017, when it was about 600,000.

Helped by good weather, many tourists from abroad, such as Australia, New Zealand, Asia, the US, Switzerland and many from Italy, joined the beer festival with the people of Munich, the festival leaders said on Sunday.

Landlords and market traders spoke of a 'strong start. 'They are satisfied with the sale. 'The guests came with a big appetite and ate thirteen oxen, two more than last year. Hundreds of thousands of liters of beer ran through the throats.

The German city of Munich has been dominated by the annual Oktoberfest since Saturday. Until Sunday 7 October, the beer flows out of the taps between ten o'clock in the morning and midnight. Every year, millions of visitors come to the world's largest popular festival.