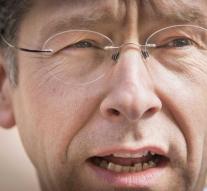 luxembourg - The Greek Government early next week 7.5 billion face in her bank account. The finance ministers of the euro on Thursday in Luxembourg before the light put on green.

The amount from the European rescue fund ESM is part of a third assistance program of up to 86 billion euros. The ESM, a permanent financing system for EU countries in trouble, is the largest lender in the country.

According to Eurogroup chairman Jeroen Dijsselbloem Greece fulfills the conditions for a new installment. The country needs serious reform and cuts. The Greek minister Eucleidis Tsakalotos said in Luxembourg in 2015,, which was a difficult year, ',, especially for Greek citizens. '


EU Commissioner Pierre Moscovici (Economic and Financial Affairs) hopes that the money,, oxygen '' will bring the Greek economy, which can grow according to him in the second half of this year by 3 percent.