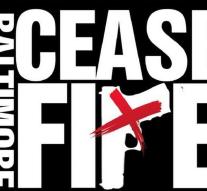 baltimore - Residents of the US city of Baltimore massively enter for a weekend without murders. Already two hundred murders have been committed this year in Baltimore, and they want to see the residents differently.

Through social media, the message is spread massively for 72 hours without murder. In the first weekend of August, 4 to 6 August, this will have to take place.

The money raised by this action will be given to the family of someone murdered in Baltimore after the first weekend of August. Hundreds of people have already indicated that they want to participate in the action.