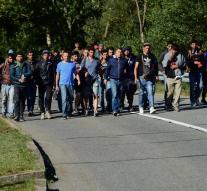 warsaw - More than 710 000 refugees in the first nine months of this year have fled within the EU. That the EU border control agency Frontex Tuesday declared. Last year, a total of 282 000 migrants within the EU.

In September passed some 170,000 asylum seekers neighboring the EU, approximately 20 000 less than the previous month. Most migrants landed on the Greek islands , especially Lesbos . Since early this year were around 350 000 refugees in Greece.