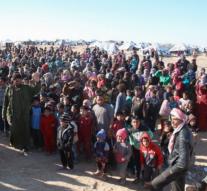 amman - 70,000 refugees are in appalling conditions attached to the northeastern border of Jordan.

Before that warns Human Rights Watch (HRW) Friday. The human rights organization calls for assistance to the displaced Syrians resumes.

The Jordanian army closed the border with Syria last month off following an attack by Islamic State border guards, which resulted in several deaths. Then would substantially all aid ceased to tens of thousands of refugees who are stuck at the border. It would mainly be women and children.


Also, organizations should still get sporadic permission to assist the refugees. According to HRW be stopped all deliveries of food and medicine. The refugees would only scantily supplied with water.