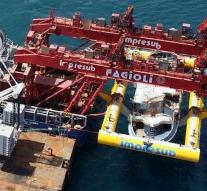 - The Italian navy has recovered a total of 675 bodies from the disaster ship full of refugees that April for the coast of Libya last year and sank early this month was taken from the seabed. Only in the more than 458 were found dead. Has announced that the leader of the salvage operation Thursday.

Italian Prime Minister Matteo Renzi announced soon will highlight after the accident at the wreck to bring the misery of refugees face around the world. Now come established that at least 845 migrants have died. After the boat capsize were 170 bodies recovered from the water. Only 28 passengers survived the dramatic voyage.


The hundreds are dead brought to Sicily to be identified. On the basis of documents found objects and the Navy has already determined that the passengers were from Ethiopia, Eritrea, Bangladesh, Sudan, Somalia, Mali, Gambia, Senegal, Ivory Coast and Guinea.