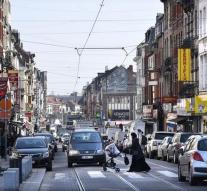 brussels - The Belgian authorities have 57 possible subversive persons identified in the Brussels commune of Molenbeek. That Minister of Security and Internal Affairs Jan Jambon said Thursday on Belgian radio.

The minister said after the attacks in Paris last year that he wanted to \'clean up\' Jean, because several residents of that municipality were found involved in terrorism. Jambon announced on Thursday the first results of the so-called Channel Plan that radicalization, violent extremism and terrorism prevention.

The group of 57 'is perilous' coexists returned Syriëstrijders of 27 jihadists to leave at the point would be to Syria. They are on a list and be monitored by police and social workers. They may not all represent a real serious threat, says Jambon.

The police did further over 5000 searches to see who lives where. There are 600 people were removed from the population.