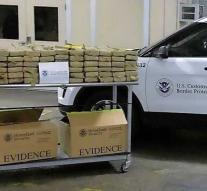 philadelphia - Customs in the United States intercepted 538 kilos of cocaine on Tuesday at the port of Philadelphia. The drugs were found by police dogs on a ship en route to the Netherlands,...

The 538 kilos of drugs were divided into 450 blocks. The blocks were hidden in thirteen bags on the MSC Desiree container ship.

According to Joseph Martella, customs spokesperson, the ship is fully loaded in Guatemala. From there the ship would sail through the Bahamas, Philadelphia and with the Netherlands as its final destination.

It is the largest drug catch in the port of Philadelphia since 1998.