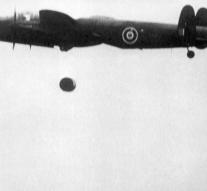 hannover - About 50,000 people in Hanover have to leave their homes on Sunday because five bombs from World War II are rendered harmless. Only once a city had to be evacuated on such a large scale because of old bombs.

One in ten residents of the German city has to leave his house. The buildings to be evacuated include seven nursing homes, a hospital and a tire factory. The authorities expect everyone to return home for the evening. For the inhabitants there is at least some soup.