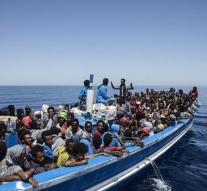 geneva - This year, already 5,000 migrants drowned in the Mediterranean, a record number according to the International Organization for Migration (IOM). Throughout 2015 there were just under 3,800 deaths.

Thursday came about a hundred people, mostly West Africans, when two crowded inflatables began to change into the Strait of Sicily between Libya and Italy, reported the IOM and the UN refugee agency UNHCR. 'Through these two incidents increased the total number of deaths this year over 5000,' said an IOM spokesman.

UNHCR wrote the 'alarming increase' in the number of deaths due to a combination of factors: bad weather, the declining quality of the boats where smugglers use and the tactics they use to avoid being discovered. They put large numbers of people at once on boats, making it more difficult to rescue them when things go wrong.

According to the IOM came this year to Thursday, December 22 358 403 migrants and refugees at sea in Europe. Most arrived in Greece and Italy to land.