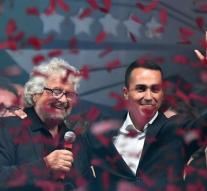 rimini - The Italian 5-star movement has chosen 31-year-old Luigi Di Maio as the leader. The anti-establishment party is high in the polls and in the parliamentary elections next year it is likely that it will be national power.

Di Maio, sponsored by party founder Beppe Grillo for the post, received 83 percent of votes in an online vote among party members against six lesser-known candidates. He is also vice-chairman of the Italian Chamber of Deputies.

The 5-star movement in most polls is 28 percent just above the ruling Democratic Party. To reach a majority, the party has to work with other people, something she has not yet wanted to do. The right Lega Nord and Conservative Forza Italia of former Prime Minister Silvio Berlusconi each have 14 to 15 percent.