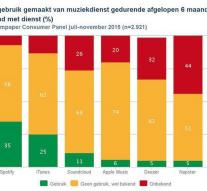 
Spotify is also the most famous music service, just 8 percent of the Dutch indicates not know the service. iTunes has a brand recognition of 86 percent. According to figures from Telecompaper.
With 1.5 million users SoundCloud makes the top three. However, this service is much less known. Over a quarter of the Dutch indicate that they do not know this service.
The new service Apple Music already has a brand recognition of 80 percent. About 6 percent of the Dutch have used the service during the past six years, representing about 800 000 users since the launch of the music service in June. Apple Music it is still not in the top three most used music, but lets all services like Deezer, Napster and Rdio behind.
For the Telecompaper Consumer Panel 2900 Dutch were questioned about the use of music in the period July to November 2015.
NEW