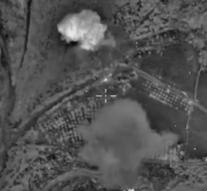 damascus - By Russian air strikes in Syria's Latakia province about 45 people have been slain . It has been reported the Syrian Observatory for Human Rights .

Among the victims was a high rebel leader of his Free Syrian Army (FSA). That group is backed by Western countries. Latakia is located in the west of Syria and controlled by rebels.